skip to main | skip to sidebar

Enjoy!
Posted by Josh Meisel at 8:33 PM No comments:

Treats for anyone who still comes to this blog...

I have been on Heron Island for the last 5 weeks running my experiments, TAing some courses, and living the island life. A couple weeks ago a few reporters from the Courier Mail came up to the island and took some pictures. Here's the article that appeared in last Sunday's Courier Mail (Nov. 11, 2007): 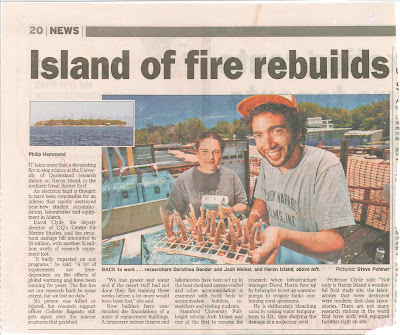 Also, it's Movember, and all of Australia has joined in the cause. I am participating as well (see below): 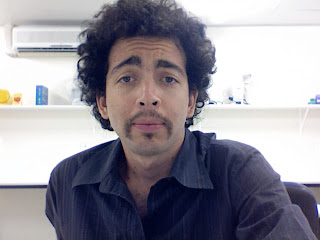 I'm almost done here, then back to Brisbane for a week, and then up to Lizard Island (far north Great Barrier Reef) for the coral spawning. Hopefully the cameras will be rolling and we can make some Monkey Magic.
Posted by Josh Meisel at 7:58 AM No comments:

This past week I visited Canberra as part of my scholarship program, and had the opportunity to meet the American Ambassador to Australia. We also sat in on an incredibly raucous Parliament session, where the two parties insulted each other like schoolboys and some members were ultimately ejected from the floor. If only the American congress operated like that, politics would be a lot more fun.

After being wined and dined for a few days we traveled up to the Blue Mountains for some hiking (and atonement), before heading to Sydney and then back home. I posted some pictures from the weekend on picasa. Check them out here…
Posted by Josh Meisel at 3:35 PM No comments:

I exposed myself to Brisbane art/culture

I’ve become friends with a bunch of Mexicans here (who knew I would be practicing my Spanish in Australia?), and over the weekend we went to an art gallery opening in The Valley. There were free drinks, free food, and a live band, and all the exhibits involved “Gray Water.” One black-tiled room was empty except for 6 bubble-making machines mounted to the ceiling, blowing bubbles onto the ground. A sign outside the room read, “The water inside was used to clean bodies in a Mexican morgue. Enter at own health risk.” I went inside, but covered my wine glass so no corpse-bubbles floated in. In another room a movie was being projected, in which naked Thai teenagers were linked together underwater in a sphere, and kept breathing with SCUBA support. In less interactive rooms I saw poison bottles melted into the floor amidst fluorescent lighting, and photographs depicting mannequin heads floating in small crater lakes. All in all, extremely Grey Water.

In other artistic news, The Brisbane International Film Festival (BIFF) was a few weeks ago, and I saw a bunch of great films for obscenely high ticket prices. The highlight was going to see “All My Friends are Leaving Brisbane” with Ben, which turned out to be a Brisbane version of “Garden State” meets “My Big Fat Greek Wedding.” Unbeknownst to us, it was the world premier, so all the tickets were sold out. However an old grandma-aged lady was scalping tickets outside, so we bought two from her, and made our way inside. The directors and actors were all there, which was fun, and it was interesting to see familiar Brisbane places in the movie. The take home message: All my friends are leaving Brisbane. Ben identifies with this message, but I don’t think it’s quite hit me yet. Thursday is Mexican Independence Day, so I’ll see most of my new amigos there.
Posted by Josh Meisel at 4:26 PM No comments:

I’ve never seen fireworks like this before. In honor of the 10th annual Brisbane River Festival (which celebrates the Brisbane River), self-congratulatory fireworks were set off last Friday night. What made these fireworks special was the depth/levels – they were shooting these things off from the river in front of us, a bridge downriver on the right, a bridge upriver on the left, and from the tops of 5 buildings across the river in the Brisbane skyline. As always, I took some poor video of the event until my camera battery died.

Brisbane’s very own soccer team, the Brisbane Roar, plays at the brand new Suncorp Stadium right outside the downtown area. A short walk from the West End, we headed over Saturday night to see the opening game of the soccer league’s third season. Tickets were only $15, and the beer literally came out of a conveyor belt – it felt like a Ford assembly line. Brisbane was playing the team from Adelaide, and ultimately tied with a final score of 2-2. It was great fun for the whole family (lots of kids there), and I took some poor video of the event.

The video includes a number of disappointing moments, a few missed goals, angry comments from British/Australian fans, and then finally the celebration for a Brisbane goal not captured on camera. Stay tuned for PARTS TWO, THREE, FOUR, AND FIVE...

Posted by Josh Meisel at 7:10 PM No comments:

the only link that matters